Printed in Voice Male – Summer 2005
Sexism on the River: Taking a Stand Against the Male Tribal Code
By Pip Cornall 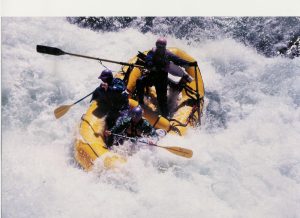 I was guiding a group of men on a two-day whitewater rafting trip on the Upper Klamath River near the Oregon border. This wild, isolated section of the Klamath slices through the rugged Cascade Mountains of southern Oregon and northern California. With its unparalleled wilderness beauty and over 30 major rapids including Hell’s Corner Gorge, it is one of the West’s finest class IV-V river trips.

My group consisted of 12 men aged 30 to 50. My helper was a competent young guide, E., who had not guided a commercial trip on this river before. I’d kept him close to me as we negotiated the tricky class IV+ rapids in the gorge. We had a very successful run through the gorge and even played a significant part in a rescue involving two other rafts. One of the other boats had flipped and several participants were injured. After the rescue I took several of the injured in my boat and placed two of my strongest paddlers in each of the weaker boats with instructions to “follow my lines” in the gorge.

Although I’d had a lot of experience in the gorge and ran it regularly throughout the summer, I was quite tense about the situation. I’d lost four good paddlers and replaced them with two injured passengers. The men I placed in the other rafts had extensive rafting experience, so I told them to steer the boats from the front since the guides were struggling in the bigger water. Consequently we had all experienced the level of bonding that occurs in such dangerous sport activities. I could not have been happier with the performance of the men I’d put in the other boats. They had done well and followed my lines perfectly!

As we drifted on the calm waters leading to our pullout we were happy, tired and content. This was rafting and companionship at its best. At the pullout we transferred the injured paddlers and said goodbye to the other rafts. For them it was mostly easy water for the remainder of their trip. Meanwhile, our group would be meeting our driver to be transported back to the head of Hell’s Corner Gorge, where we would camp for the night. In the morning we would run it again, this time as paddle boats without oar assist. I would be using a guide paddle and would not have as much control in big water, but would have to rely more upon the paddling ability of the crew. This was both a reward and an acknowledgment of their excellent assistance in the gorge.

After a short wait we met our driver and began the slow climbing trip back to our campsite. As we prepared the evening meal there was a lot of boisterous boasting and storytelling as the men recaptured the excitement of the gorge. I remember thinking what a great day it was and how much I loved my job as raft guide.

After a while I noticed that the men had launched into some serious drinking. As I listened to their joking, it dawned on me that this was a stag trip! They were here to celebrate the impending wedding of one of their members. 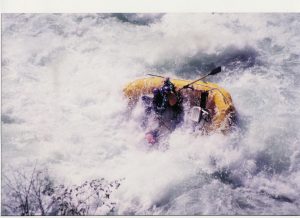 Like any group of men, they wanted to include me in their activities. They kept pouring me drinks and laughingly implied that my “Aussie image” would be compromised if I refused to join them. This was very hard for me. I had got a lot of mileage from my Aussie image; it had opened many doors for me in America. Also I liked the men; we had shared danger together and had been generous in the rescue of the other rafters. Any refusal on my behalf to join would also brand me an outcast, a “wuss.” My heart pounded as I realized I was up against that old male tribal thinking which said, “We’ll accept you, and protect you, but now you must do as we do, you will not go against the traditions, you must follow the rules of the tribe.”

I checked in with myself and decided to talk to them. Summoning all my courage, I told them that since I did gender awareness work in the schools and with men in the wider community, I could not condone this behavior. I knew that demeaning sexist behavior ultimately supports sexual assault and other forms of violence against women. I explained how this tore at me, since I liked them as a group and wanted them to enjoy their rafting trip. I suggested they have fun and celebrate the impending marriage without having to demean women. By this time they had downed a number of hard drinks, so my speech appeared futile. Some of them said I was being a spoilsport!

Unfortunately E., the young guide, joined in with them, but I could hardly blame him. He had neither the maturity nor the education and understanding to do otherwise; he was just being “one of the boys.”

As soon as dinner was over I moved my bedding upriver, out of earshot of the group. I’d rather be among the bears than be involved with the debauchery, but I had the usual sick feeling in my gut when I heard women being degraded. It reminded me of my youth in rural Australia, when I’d had to choose between supporting women and any aspects associated with the feminine and being included in the dominant male group. When I tried to resist the group I was teased, but if I went along with them I felt dirty and in betrayal of the women I loved.

As I sat on my bedroll I felt alone and somber in contrast to the laughter floating up the valley from the “party.” I took a deep breath and tried to let the bad taste leave my body. I rolled back and lay there looking up at the stars, trying to connect with nature and to calm the confusion I felt. Eventually I began to feel grounded again, and fell asleep to the sounds of river and the animals of the night.

I was in camp early the next morning to get a strong brew of coffee going. We had some very serious rapids to run and I did not want any of the group to be hung over. They needed to be fit and alert. The men filtered down to breakfast one by one but surprisingly appeared bright and energetic. These guys were obviously conditioned to solid drinking sessions.

After hash browns and pancakes I went down to prepare the rafts. I was stunned when I saw that each raft had a life-size ‘blow-up doll’ lashed to its bow. Oars and paddles had been crudely shoved into available orifices and the effect was grotesque.

I was in shock. I had hoped the evening’s activities would be forgotten. I normally loved the mornings on the river. It was my quiet time, a time to connect with nature and prepare for the day. 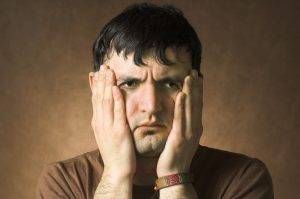 I really had no choice: another showdown was imminent. I gathered the men, who were giggling like school kids. E. was carried along by their antics and was not much help to me as I made my stand. I asked that they remove the blow-ups and stated again that I was not happy at the disrespect to women. I suggested that these attitudes might be carried over into their marriages. One man argued vehemently against me. He was the Vietnamese son of an American GI. He had in the past led some of the group on trips to Vietnam, where they visited prostitution houses. I’d heard them laughing and boasting about what they’d done to women on their last trip.

We faced off. I was alone and some of them were large, strong men. I wondered where this might end. I told them that once again I was compromised. I had to walk my talk on sexist issues and yet that was hard because I felt bonded to them. There was some nasty arguing, mostly led by the brothel trip leader. Eventually I insisted that if the blow-ups were not removed the trip would end there and we would all have to walk out. I did not like making a stand like this at all, and wondered how it might affect our rafting ability if we got on the river.

Eventually the men agreed to remove the dolls, and we spent the next hour working hard to break camp and tie everything into the rafts. They were muttering among themselves and I felt I was the butt of their joking. I was confused and felt leaden. I had little energy. It was all I could do to focus on the task ahead. My fingers fumbled and it was clear that the events had affected me deeply. I asked E to double-check everything I did so that our safety was not jeopardized.

I breathed a sigh of relief as we pushed off into the current. I could focus on being a river guide again. We all had a chance for a new start–in fact it was absolutely necessary to put our problems aside and be present to the rapids ahead.

The next moment took me by surprise. Four of the six men in my boat turned to me, looked me in the eye, and thanked me for having the courage to make a stand as I had. They explained that they had wives, sisters, and women they loved at home, that they also felt compromised by the group behavior. Individually they had struggled with breaking male traditions, upsetting their friends or “spoiling the fun.”

I was astounded! I wondered if the majority of men in the other raft felt the same way. I guess I’ll never know.

Pip Cornall, now lives in Queensland, Australia and is a director of the Grace Gawler Institute – a cancer charity. Pip has built the Cancer Survivor Ship to promote the charity’s work.